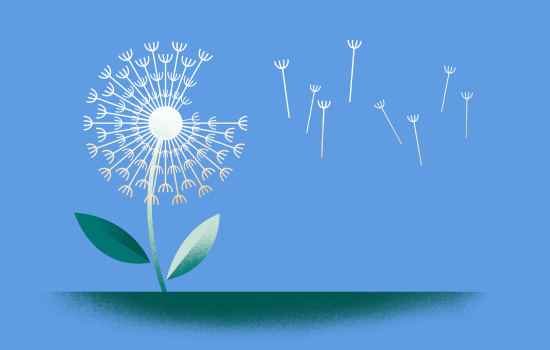 No, you are not grieving the “wrong” way.

Without even knowing you or the details of your situation, I–as both a grief coach and a griever, myself–know this is true. First, there is no “wrong” or “right” way to grieve. It can be hard to believe this at first when you are in the midst of loss. Second, one of the most popular frameworks about understanding grief was actually not created for the type of grief you are likely feeling. Especially if your grief is related to the death or loss of a loved one, which will be the main focus of this piece. It is important to note, however, that grief can arise in response to other kinds of losses (like the loss of time, a relationship, or otherwise), and this feeling is also valid.

One of the most well-worn lenses through which we view the grieving experience is the Kübler-Ross model, or what we know as the stages of grief, which were developed by Elisabeth Kübler-Ross in the 1969 book, On Death And Dying. As written by Kübler-Ross, the five stages of dying were written originally as the following: denial and isolation, anger, bargaining, depression, and acceptance. Did you notice that these stages were described as the five stages of “dying”? This is because these stages were the culmination of patterns that Kübler-Ross noticed in her work as a psychiatrist observing and interviewing people who have been given terminal diagnoses and were facing death. Even though this model was later adapted to encompass the coping methods used by folks who were experiencing the loss of someone else through illness or dying, this framework was originally developed for those facing their own deaths, not the death of others.

The work that Kübler-Ross did with folks who were dying is invaluable. It pushed the field of death care forward, and empowered medical providers to offer more empathetic support to those coping with a terminal illness. Though, for those experiencing loss, many find these stages to be limiting and restrictive. The idea of stages can also contribute to that sense of processing grief “wrong” if your experience resembles something different. Kübler-Ross, herself, acknowledged this before her death. Of course, not all things can be applied to every person. If you, yourself, have found the stages to be helpful, again let me say that you are not grieving the wrong way.

However, it’s worth noting that other frameworks exist, and there is one in particular that I would like to share. In 1996, Dr. Lois Tonkin wrote about the concept of growing around grief. Through this lens, a visual is presented first of a grief that is all-encompassing, dark, full. At first, grief is everything. Over time, the boundary of a person’s life gets bigger and bigger, growing around the grief, without it ever truly going away, getting smaller, or growing less significant.

The Ralph Site created this image based on the concept put forward by Dr. Tonkin.

There is allowance for a continued grief experience that does not need to end with acceptance or resolution. This can account for how, on certain days like birthdays, holidays, or death anniversaries, the grief that was experienced when the loss first happened can feel just as near, and just as intense. It also becomes easier to see how there is no way to tell someone to “move on'' from the death of a loved one, and that there is no “getting over” that kind of loss. This can help folks shift away from the pressure to push lost loved ones from their mind, which can feel disloyal for some.

Perhaps this concept can be helpful also to family and friends who are supporting someone who has experienced a death. It can be hard to know what to say, and how to support someone who is grieving. “Let me know what you need,” comes with golden intentions, but may not elicit much of a response, since new grief can be engulfing, and naming needs in that time can feel like a gargantuan task. If grief is viewed as something that is allowed to stay—and allowed to grow with a mourner—perhaps that can create space to talk about the person who died without feeling the urge to change the topic. It’s helpful to keep in mind that conversations like this can be normal, and even healthy, if that is what the mourner wants to do or needs in the moment. Perhaps there can still be room left at the proverbial table for who (or what) has been lost, and relieve mourners of unrealistic expectations of how to feel, or behave during such a challenging time.

Remember: There is no timeline that a grieving person can, or needs to, abide by. Grief is something we carry with us always. It is possible, however, to move forward with what is carried. New experiences can be integrated alongside the losses. There are ways for our grief to contribute to our lives, even in a meaningful way, and to make our lives fuller as we continue growing around it.

Does the theory of growing around grief resonate with you? If so, I invite you to think about the ways in which your life has grown around your own grief. If you feel called to, share this with a loved one, or use this as a prompt for your journal.

Thank you for spending this time with me contemplating grief.